Nick and I have had the Tantalus Ski Traverse on our minds for a few years now. It’s right outside Squamish and on paper, the Traverse shouldn’t take that long. It’s 40km with 3500m of elevation gain. The terrain doesn’t exactly lend itself to moving as fast as possible however. Partly because you start essentially at sea level on dry trail. In 2013, Skyler De Roches and Christian Veenstra snagged the first “in a day” trip when they crossed from Sigurd Creek to Lake Lovely Water in 17.5 hrs.  We knew that with the big snowpack, this season it would be a good year to go for a fast Traverse and so it was just a matter of waiting for good weather. Unfortunately for fast ski traverses, it’s been a really wet spring. For everything to go well, you need good melt-freeze conditions and high pressure that create a good fast snow crust and good visibility for navigation. This just hadn’t happened yet this season much so we were a bit on edge waiting for it. Every passing day and week, the snowline creeps higher, meaning more walking in the forest and less skiing. Finally, a good weather window showed up in the forecast. Sunday was a beautifully clear sunny day. Monday was a bit cloudy but still warm and forecast to clear overnight into Tuesday, possibly setting us up for good crust. Nick and I went for a quick lap of the Chief Monday after work and seeing clearing skies, decided we should at least give it a try. We packed our bags and settled on a wake up time of 2am – something we are usually pretty hesitant to do – hopefully we’d be home before lunch to make up for the early start. 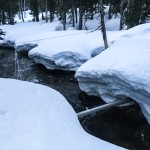 I was actually mostly expecting that the weather would have come back in overnight (like the trend had been so far the season) but as soon as I woke up, I stuck my head out the window and saw stars. I knew we were good to go for the time being, as long as the weather didn’t come in while we were up there, we’d be good! We hadn’t pre-prepared any car shuttle or system to get across the river so met at the gate to the cable car road and left Nick’s car and then continued in mine to the Sigurd Creek Trailhead. We’d have to walk a little extra at the end but it required no preparation other than carrying harnesses to cross the cable.

We didn’t dilly dally at the trailhead, got suited up, and started the watches just after 3am. We opted to start with running shoes on, carrying our boots and skis but a really dedicated party could shave a few minutes by not stopping to make the switch. The trail is decent and had surprisingly little deadfall but it is a bit monotonous. Luckily the dark and excitement for the day made it go by pretty quickly. We tried to keep our pace in check and take it pretty easy, knowing we could speed up later in the day. Soon we hit patches of snow and then continuous snow. We didn’t put our skis on right away because it was still pretty fast just walking on the snow in shoes and at that low elevation, the snow is quite full of debris from trees so it was easier to wait until we got a bit higher to start skinning. At the first big avalanche path, we stopped at a creek for some water and changed into our boots. We got moving pretty quickly and in our excitement to be skiing, took our only wrong turn of the day. We stayed a little too low to Sigurd Creek and got stuck in a canyon. We had to backtrack about 3 min and got going right back on our way. It was also about this time that I accidentally restarted my watch trying to search through the menus… 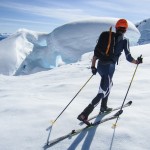 At some point, we needed to cross the creek but the snowpack was quite big and had formed giant walls along the creek where it had caved in. No snow bridges remained and the hiking trail bridge (just a log with a hand rail) was impossible to access. We continued up until the forest opened into the moraines below Pelion and Ossa and found a perfectly located snow bridge. Here we turned and headed up the north face of Pelion on steep slopes and had to use ski crampons due to the firm conditions. They slow you down a tiny bit compared to skinning but in those conditions were the only reasonable option. Now it was starting to get brighter and we had a nice view of the Ashlu-Elaho Divide and the Jimmy Jimmy area we had visited the week before. Turning around the east shoulder of Pelion we saw the sun for the first time and got our first views of the whole Tantalus Range. The skies were totally clear and we were pretty psyched! From the high col on Pelion, we had our first big descent across the south face to the Pelion-Zenith Pass. It was super firm so we shot down it in just a few minutes and made our way through some slightly complicated terrain to the pass. A bear had used this pass while crossing between valleys sometimes in the last few days judging from the giant tracks we encountered. 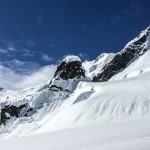 The Rumbling Glacier and Nunatuk.

The next climb up to the rumbling glacier was straightforward. We had Ryan Aldermans GPS track to go off of which was quite helpful. This is also where we deviated from our summer route up the North Ridge of Tantalus. Instead we turned south, out on to the Rumbling Glacier, the big jumble of crevasses and seracs that is visible from the Sea to Sky Highway between Squamish and Whistler. Conditions were just starting to soften up on this sunny aspect so we didn’t need crampons any longer but it was still fast travel. We made our way up along benches and around crevasses, passing above the nunatuk and then crossing left to gain the Dione Shoulder. We pretty much lucked out with crevasse bridges everywhere we needed them. The only bummer was that with the sun now out in full strength, it was hot! I don’t handle the heat well and was starting to suffer a bit. Arriving at the shoulder, we saw a group of skiers above. It turned out to be Matt Gunn and some friends. Matt had actually texted a conditions report from the hut the night before so wasn’t too surprised to see us. 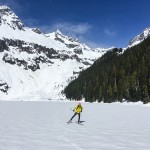 At the top, we stopped for lunch and to enjoy the fact that we were done climbing for the day. All downhill from here – a pretty good feeling. We scrapped down the east side of the shoulder to reach the Dione Glacier and after saying a quick hello to another guided party, we shot down the glacier, past the Haberl Hut, and then down the Serratus Glacier to just below the Serratus-Ionia Col on a firm crust. We made a short boot pack up and then continued our long descent. The ski to the Russian Army Camp was great corn but down to the lake was getting a bit slushy. The lake looked like it actually might be starting to open up but when we got there we realized it was good to go and still quite firm. It was just a quick 10 min skate over to the LLW Hut. From there, we did some billygoating to start down the trail in pretty crappy ski conditions. Probably the scariest skiing of the day with fall exposure right into the creek. Eventually the snow ran out and we switched back to our running shoes. The descent down to the Squamish River was pretty mellow. We weren’t in much of a rush at this point knowing that as long as we didn’t trip and hurt ourselves we’d likely still come in less than half time of the previous record. We stopped our watches at the cable car station for a time of 8 hrs and 22 min and then walked the cable one by one**. 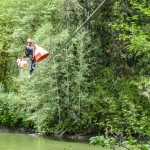 Not my favorite part of the day (Nick’s Photo).

I’ve always somewhat mockingly called the traverse ending at Lake Lovely Water the “Tantalus Lite”, insinuating that the real traverse should go all the way to Mt Sedgewick and end at the Woodfibre Plant but having done the Traverse in both summer and winter, I do think that the LLW exit is a pretty solid challenge. I’d love to see Sigurd to Woodfibre done in a day but I don’t know if I really need to be the one to push that boundary… It would also be cool to see the Traverse done as a linkup of peaks rather than just the Traverse alone. The summit of Tantalus was tantalizingly close and the North Face of Serratus was inviting as well…

**It was pointed out below that Christian and Skyler didn’t stop their watches until the far side of the cable. I think for future summer and winter efforts in the Tantalus, stopping the clock on the Tantalus side of the river (at the tower) is most appropriate. There are various ways to cross the river and they definitely don’t necessarily reflect the rest of the day. Besides, Marc Andre Leclerc clearly wins at the cable crossing for apparently walking the cable sans harness. 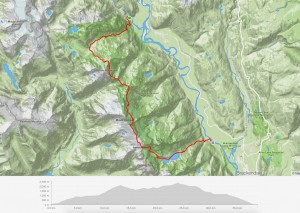 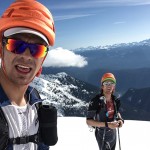 Getting warm in the sun. 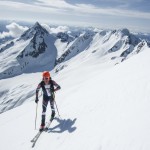 Me skinning in front of Alpha and Serratus (Nick’s Photo). 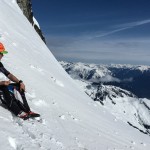 Quick break at the top of the climb. 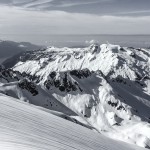 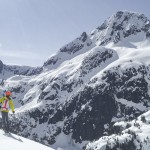 Nick in front of Niobe. 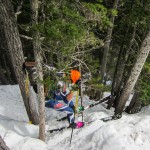 Last bit down to the river in the Jungle.