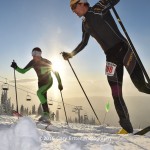 The first big hurdle of the season is passed! Last weekend was the first of two qualifying races for the 2017 US World Championship team, held in McCall, Idaho at Brundage Mountain Resort. The Northwest Passage Race featured a Vertical and Individual event, both of which served as qualifiers for their respective World’s event (the second qualifying weekend is at Sunlight Mtn. in Colorado on Jan 14/15).

To qualify for the World’s team, I needed a top four finish in the Vertical. In the Individual, the top three finishers at Brundage would automatically qualify and then the first racer not pre-qualified at Sunlight would take the fourth spot. I hoped to make it into the top four at the vertical but completely expected to be one of several guys resorting to fighting it out for the fourth spot at Sunlight. 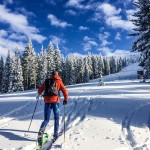 Training leading up to the race weekend has been pretty good. We’ve been skiing since October 3rd pretty regularly, especially the second half of November and beginning of December and I came into race weekend with 36 days of skiing under my legs. I think this was a pretty big advantage. While some of that was definitely on race skis, much of the last two months has been stormy and the unending hose of snow has been pointed at the Coast so I’ve spent quite a bit of time on fat skis, just trying not to sink to my waist! I still managed a good volume of training, even if my actual vertical ascent doesn’t look as impressive to previous months. Having Lars Flora visit during one of the better weeks conditions-wise was especially good for getting in a few big days. I did manage a few proper workouts on the skinny skis as well including some good intensity with Nick and a bit of technique work. 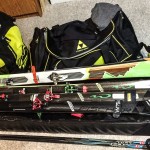 The week of the race, I headed to Idaho driving almost exactly from the 49th to the 45th Parallel, and stayed with the race organizer, Jim who was keen to chat about skimo and kindly let me break trail while he showed me around the course! A few days of exploring and I had a good handle of the area. Brundage is definitely quieter than my home hill of Whistler Blackcomb but I can see the appeal! Even a few days after a storm, we were able to swing off a run and find untracked snow that would have disappeared within minutes of the lift cracking at Whistler. By the time the Vertical race rolled around on Friday, I had moved to the Brundage Inn with my Dad who came to watch and Meredith Edwards and Mike Foote who were also in town. 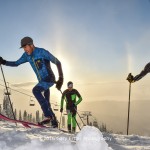 Mike, Eric, Tom racing near the top of the Vertical. Gary Ertter Photo

The Vertical race featured 500 meters of elevation gain and climbed up the right side of the ski hill. The first third was on groomed runs but quickly turned off onto flat skin tracks and then back onto an ungroomed and very chopped up run. The conditions were extremely challenging and very different from most Verticals that tend to stick to steep, icy, groomed runs. The soft conditions favoured racers who could keep the gas on while maintaining a smooth and efficient stride without slipping. I’ll admit that my kick turns may not have been pretty but I think my technique was decent. I used my freshly mounted VerticAlps from Fischer. While I recognize the silliness of using a ski that is not actually built to go downhill, only up, it is also cool to use a tool that has been highly specialized for a particular application – Vertical ski races.

John Gaston pushed hard from the start with Tom and I giving chase. I knew that I only needed the 4th spot so when I saw we had opened a bit of a gap, I was happy to let Tom push through the crud and not expend any extra energy. Mike Foote bridged the gap up to Tom and I and fell in between us. We charged up behind John to finish at the top of the lift where Mike and Tom battled for podium positions while I was happy to scoop 4th and punch my ticket for Worlds without expending anything extra!

Racking the skis for the boot pack with Mike and Tom chasing. Dad’s Photo

All week the forecast for Saturday’s individual event was a balmy -20 deg F and I was hoping it wouldn’t come true. It’s never fun risking frostbite in a ski race and while I’ve never had any major issues, my toes and fingers never really appreciate that kind of cold, especially since where I live, it’s usually 34 deg F and raining! A le mans style start had us running from the base lodge in the pre-dawn light at 7:30am and then a fast skate down to repeat the vertical course on our first climb. This was the only portion of the race in-bounds until the end of the final descent and I fell in with John and we developed a bit of a gap over Tom and Mike. I botched my first transition and John started pulling away but I was feeling strong and happy to see that I was gaining on the guys behind me. On the second descent and third ascent, a crash followed by a binding issue caused me to loose time. I had to stop in my tracks to fix my binding and Tom caught back up to me. I pulled away as he had a skin failure and Mike connected back with him. On the final ascent, I was ready to charge and held the gap between us, launching off the final transition just as they arrived to finish 2nd! Unfortunately Tom had another fall on that final descent and broke a pole but Mike skied in for 3rd and took the final pre-qualifying spot.

After thawing out, I was pretty excited to have pre-qualified for the Individual event. I fully expected to be racing for the 4th spot in Colorado so this was a big relief that I wouldn’t have that to worry about! I still need to race in Colorado if I want to qualify for the Teams event at Worlds (or the sprint) but the pressure is definitely off. The Individual race was absolutely my reach goal so I couldn’t be in a better spot. I’m also pretty excited about the US Team so far and really looking forward to those still to qualify! Big thanks to the organizers and volunteers of the event, the resort that was willing to put it on, and all the USSMA organizers who helped make it happen!

Training now will switch towards a bit more specificity for the Pierra Menta, my primary goal race for the season with a bit more volume, punctuated with intensity sessions. I’ll train through the new year and then hopefully head to the Canadian Worlds Team Qualifying race at Castle Mtn on Jan 7/8 and then down to Sunlight Colorado the following weekend. Immediately after that, it’s off to Europe for the first World Cup in Andorra on Jan 21/22! I’m pretty excited! 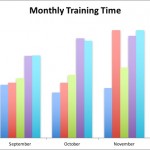 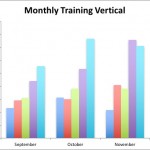 Vertical gained (meters) in September, October, and November from 2012-2016 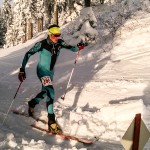 Chasing Tom Goth in the Vertical. 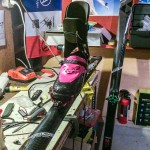 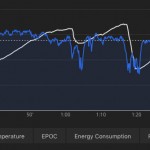 6 thoughts on “Training and US Team Trials”