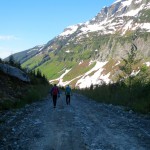 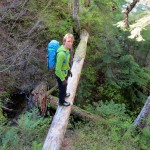 Nick deciding that the log was a little too slippery to cross.

While discussion of another trip back to Washington State and Rainier has been ongoing, weather has kept us in BC. A week ago, I bailed on Nick when we had plans to climb the North Ridge of Tricouni Peak because of a serious cold. This week, I was feeling better and the weather was looking reasonable. Brad was off work and joined us as well.

The NR is approached from the Roe Creek FSR, a few kilometres down from the Cypress Peak trailhead. Unfortunately no trail exists and the approach starts with a short bushwack and then finding a way to cross Roe Creek. We were hoping that the snowline would just reach the creek to give us good time up the canyon into the NR drainage. For future reference, leaving the FSR as close as possible to the drainage and heading straight in is probably the easiest. The creek crossing was cold but manageable even in high spring runoff. Gotta remember to bring a small towel next time. 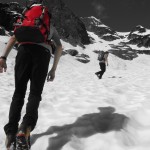 Brad and Nick hiking up towards the North Ridge 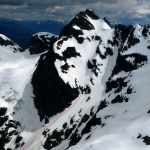 The canyon was filled with avy debris so we made quick time up into the alpine meadows above and arrived at the North Ridge. The most direct route up the ridge looked wet and bushy so we stayed right on the snow until we could traverse back left onto a steeper section of the ridge. We transitioned several times between steep snow and rock scrambling until crossing a snowy arête to the base of a steep rock step. Here Nick to the lead for two pitches of fun easy climbing. We arrived on easier ground as it started to snow and unroped to scramble what we thought was the summit.

Arriving at a false summit, we realized we had a pitch to descend into a notch followed by a final pitch to the true summit. Nick led the final pitch and we arrived on the true summit. We descended Tricouni via the scrambles route toward the meadows and then got on a snow ridge leading to Cypress Peak. We scrambled to the summit and then down to the glacier on its North side. A fast boot ski took us all the way back to Roe Creek and the trail up to the road. 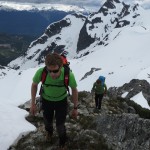 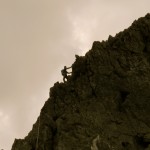 Nick leading the last pitch to the summit.

I had a blast even with the threatening weather and some intense scrambling. A few really steep snow slopes and wet scrambling sections with big exposure made me think but as the summer goes on, hopefully I will be a bit more comfortable in these situations. Luckily, Nick is a pro when the climbing gets interesting and keeps cool as a cucumber.

We each carried 2 ice tools and full crampons but switched back and forth frequently. 1 tool and 1 light axe would likely have been a better option. The three of use used double ropes and Nick brought a (very) light rock rack. Slings on rocks seemed to be the best option. 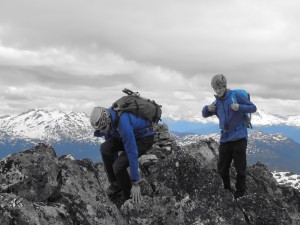