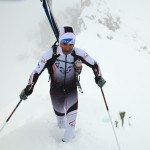 After four years of Nordic ski racing at the University of Vermont, my competitive drive was fairly low. Training and racing year round took its toll and I was happy to settle into life in BC with skiing on the back-burner. As I was drawn more and more into rock climbing, trail running, and backcountry skiing, I missed the structure of training and the fun of competition. Doing my first ski mountaineering race at the Dogtooth Dash in 2012 was very exciting and motivating. I found a sport that allowed me to take a competitive approach into the mountain environment.

Coming into my third season of competitive racing, I am lucky to know and train with some of the top talent of North American skimo and mountain running. I am also lucky to have some great sponsors that have already given me a great deal of support. 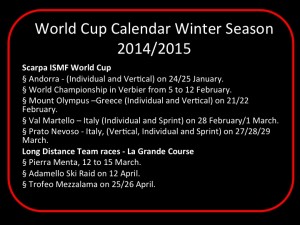 While the competitive skimo scene in North America is pretty cool, no one would argue with the assertion that the Alps are the centre of the skimo world. The culmination of this for some is the World Championships, held every other year – this year in Verbier, Switzerland. For others, the highlight is one of three Grande Course races, the Pierra Menta in Italy.  These two events will be my focus for the season.

In late December 2014, I will head down to the US to spend a few weeks training at altitude before racing the US National Team qualifying races January 3rd, 4th, and 10th. The goal is to qualify for Team USA to race the World Championships in February. After the qualifying races, I will be headed to Europe to train in the Alps for the period leading up to World Championships. Europe is also home to the World Cup circuit, held throughout the season, of which I will attend as many races as possible, including hopefully, the Pierra Menta. It is going to be an interesting season. Taking the semester off school and work will allow me to focus, but a month on the road, flights to Europe, and racing in countries where I don’t speak a word of their language will all present significant ‘non-training stress’.

A lot of athletes I know have taken to asking friends and family to donate to help their cause. This is certainly critical to success – even the best pros rarely are fully supported – but I am not quite ready to outright ask for money. I do need some help though and I think I came up with a better way to do it.

Click the |Support Me – Buy A Photo| tab at the top of the page to buy a print and help support me on my way to the World Cup this season. I would also appreciate if you could spread the word about my photos through Facebook, email, or whatever.