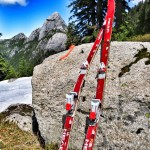 Old skis found on the ridge.

Prior to the new Sea-to-Sky Gondola, the Upper Shannon Creek Valley was only accessible by a somewhat difficult and rather long drive up a 4×4 logging road. Once in the valley, the trails were so overgrown that hiking was not particularly pleasant and running was outright impossible. With the Gondola in place, access is a quick 10min from the base of the Chief and trail improvements mean that running is now pretty reasonable (though there is still a lot of work to do). 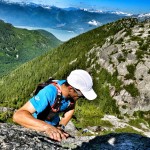 With the ease of access, it has been exciting to explore new areas in the Valley that were rarely visited. Before the Gondola, Sky Pilot was an all day affair. Now it is a quick morning trip. It is also no longer necessary to stick to the main normal routes in the area. The valley trails are becoming fairly well established but the potential for excellent trails in the alpine is just being recognized. The entire valley is ringed by a horseshoe shaped sub-alpine/alpine ridge that forms the headwaters of Shannon Creek and that I believe will become one of the most premier trails in North America. 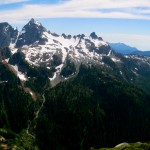 I have been eyeing the horseshoe since the opening of the gondola as an awesome alpine run/hike and slowly ticking off sections during recon runs. I met Jim Sanford a few times doing the same thing and we agreed to join forces. Nick was keen too as always so we picked a nice weather day and got after it. The Gondola folks were nice enough to let us upload early with the staff so we could beat the heat. 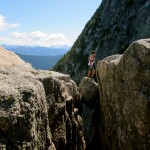 Nick took the best pic of the trip. Me jumping a chockstone below Habrich.

The horseshoe begins at the top station of the Gondola and starts up a trail that is currently under development called Al’s Habrich Ridge. The trail is well marked to begin and leads into the sub-alpine passing by tarns and over granite slab outcrops along the ridge crest. Several sections require scrambling with hands over the rock. Upon reaching the West Col of Mt. Habrich, the trail leads below the South Face to the East Gully. Here the trail ends and a steep bushwhack up to the East Col is necessary. 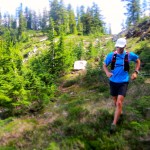 Running in sub alpine meadows between Habrich and Sky Pilot.

The next section of ridge connects Habrich and Sky Pilot via amazing sub-alpine heather slopes and rock slabs. Colin, Will and I have now spent a few days along this section working to clear a few patches of alder and mark the trail. It is well marked but either on granite slabs or on heather slopes. It will take some time before a good trail is beat in. One section here is a bit tricky. There is a sub-summit East of Habrich that we named the Brain due to it’s appearance from the south. Jim scouted, flagged, and trimmed a way over it that stays on the ridge crest but requires a low-5th class slab traverse with great exposure. I was unwilling to go this way unroped even with rock shoes. There is an alternative route that bypasses the Brain to the North (as seen in our GPS track) but requires pulling on lots of fixed ropes and bushes, is very steep, slippery and muddy, and descends much lower off the ridge crest to make for much more vertical gain. While this may be the easiest way currently, Jim’s route on the crest is much more logical. We have had lots of discussions about the possibility of installing fixed gear here to make it passable without technical equipment and thereby bring it into line with the entire rest of the traverse that is essentially ‘hikable’. 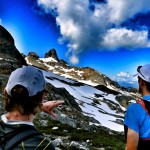 Picking a line over to Co-Pilot. 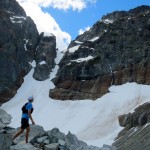 Reaching the low point on the ridge, you transition from sub-alpine meadows to glacier moraine and ascend up to the stadium glacier by curving around the North Face of Sky Pilot. Here there is some micro-terrain navigation required to avoid some bluffs without gaining too much elevation. We crossed the Sky Pilot climbers route where it goes onto the glacier and traversed towards Co-Pilot cutting directly under it’s North face by way of some minor easy 3rd class scrambling on reasonably solid rock. We crossed a small snow patch in the bowl under the Co-Pilot and then descended on the ridge crest off it’s West side. This is a steep gravely descent that was not runnable. Once off the steep gravel you are back into sub alpine heather meadows where the top of Skyline Ridge meets the main Ridge. 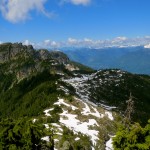 Looking towards Goat from Co-Pilot.

Here it would be possible to descend back to the Gondola stn via Skyline Ridge and avoid the difficulty of ascending Goat and shuttling cars to Murrin. 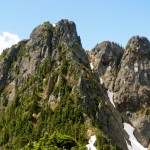 We continued towards Goat summit by ascending the main obvious gully. It was steep gravel with much kicking steps into dirt and pulling on bushes. We were very worried about kicking rocks on each other and a tumble here would be a long was down an unpleasant slope. We came to a treed ledge leading right onto the ridge crest with better rock and followed that to the summit with some 4th class scrambling and much exposure. 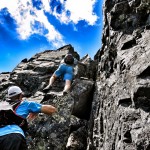 Final scramble to the top of Goat Ridge.

From the summit of Goat Ridge, we followed well established mountain bike trails to the West. We had some trouble getting side tracked on the Disneyland trail but made it on to the right direction by following a GPS track and Jim who had been there before. This led down to Petgil Lake and the more established trail to Murrin Park and a dip in the lake, a soda, and flip flops in the car.

The traverse is awesome. I do recommend though scoping out individual sections before attempting the entire trip. Conditions will also vary significantly with snow conditions throughout the year. It is also important to know where to find and refill water as it is not always prevalent along the ridge crest. An even cooler trip would include summiting Habrich, Sky Pilot, and Co-Pilot (along with Goat) along the traverse. This would add significantly to the vert and likely overall time. 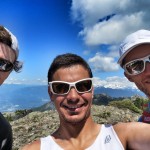 Summit shot at the high point of the day.

You can get the GPS track here: Movescount 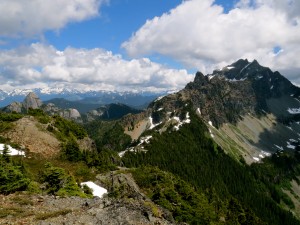 An unusual view. Looking back on Habrich and Sky Pilot from Goat.