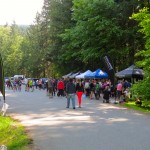 Saturday was my first trail running race of the year. I haven’t been running as much this year as last year but have been trying to ramp it up as ski season comes to a close. Loop the Lakes is a 22km race on the trails around Alice Lake Park including the Four Lakes Trail – a loop we frequently run on. I jumped at the chance to race on familiar trails. Sarah entered the half-marathon distance race as well – one of her longer trail races too. 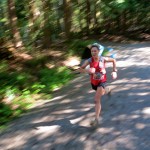 We arrived with just enough time to stretch from the drive, hit the bathroom and pick up our numbers and then it was time to hit the start line. Brad and Nick raced the 22km distance as well and Karina and Aimee raced the 15k and 8k respectively. I hoped to push the pace from the start to make some time on Nick, an incredible downhill runner, before we reached Entrails, a long technical descent but right off the start, Brad and Nick were pushing the pace hard.

I was holding alright on the small climbs but couldn’t keep with them on the flat stretches. I lost sight of them after my second fall of the day about a third of the way into the race. I pushed hard on the big descent to stick with the runner in 3rd place and then went on the offensive on the long climb back to Alice Lake, moving into third with a healthy gap. I could feel the lack of miles in my legs by the finish but managed to hold on to third. See movescount data here. Race results are up here: results. 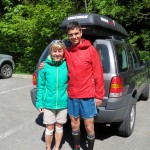 Nick and Brad ended up battling the entire race with Brad holding on during the descent and nipping Nick at the line. Sarah had a big ankle twisting wipeout but finished the race with bloody knees in 5th overall for women. We are both still pretty stiff but starting to feel better. A ski with Stano and Brad on Sunday helped loosen my legs up too.

Overall the race was well worth the money with a well marked course, lots of volunteers, excellent aid stations and post-race food, draw prizes, and good prizes for the winners. I am definitely not used to running so fast on flatter terrain. This will definitely be something I need to improve. I am feeling alright on my descent abilities. Congrats to Brad and Nick for running a strong race – this guys are getting really fast – I am looking forward to running with them more the next few months.