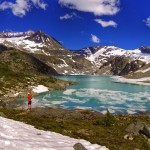 Wedgemount Lake with the surrounding peaks.

Nick wanted to climb the Northeast Arete on Wedge Mountain this week, on of the classic Coastal mountaineering routes. I was keen but had already done it so I suggested we try something that we had been talking about since last season.

Wedgemount Lake is a beautiful turquoise glacial lake with a small hut in Garibaldi Park. One of my first few hikes in BC was to the hut and up to the lower slopes of Weart Mtn. Since, I have visited a bunch of times despite the long, steep approach climb to get to the lake. The lake is ringed by five peaks; Cook is on the left, a big rubble pile, Weart and Wedge are the next two and the most impressive of the group, Parkhurst and Rethel are on the right with steep North sides facing the lake but gentle Southern slopes.

I proposed we attempt to traverse around the lake and over all five peaks in one effort, probably the first time that has been done, especially in one day. We would get to tick of the NE Arete of Wedge for Nick and both tag a few new summits while exploring the unknown NW Ridge of Weart. 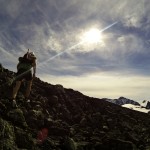 Scree on Cook. Not recommended.

We got a relatively early start, leaving from the newly built trailhead at 8:00 am.  The new trail ascends more directly and I suspect may be quicker than the old one. We made decent but not terribly fast time up to the col just before the hut and dropped out poles and refilled on water. From here we turned North and ascended the long talus slopes to the summit of Cook. Now we could see the long ridge stretching up to Weart and then beyond over to Wedge. Despite the quick tic of Cook, it all of the sudden felt like we had a long way to go.

We descended to the Cook-Weart Col and started up the NW ridge which looked more imposing as we got close. We tried to bypass a section on snow slopes to the north but the snow was very isothermal and without a rope, a sagging ‘shrund turned us around. We ended up mainly staying on the ridge crest with a few sections that we bypassed on either side to avoid more technical climbing. The ridge was mostly very reasonable and even some sections of good rock, but lots of loose rubbly ledges with big exposure. The climbing was never hard but I certainly needed some encouragement from Nick at a few points. There was no specific crux in my mind, but a few tricky down climbs at notches in the ridge. The final notch found us at the base of the summit pyramid where it was easy scrambling to the top! 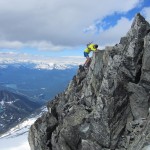 We descended the SE Ridge described in Gunn’s Scrambles in SW BC book to the Weart-Wedge Col and then started up the NE Arete of Wedge. We stayed on the ridge crest from the Col and ended up doing the rock crux of the day at a notch that we could have bypassed by staying on the snow that the normal route follows. We got onto the snow section of the ridge and put on crampons. Nick was testing out some new prototype Salomon space boots so his feet were feeling decent. I was struggling to keep up in my runners as the tight crampons were crushing my toes. He was kind enough to kick me steps up the ridge. The conditions were good with deep isothermal snow that made the steps very secure but had us a little worried about wet slides. It was snow to the summit but the strong wind and being rather wet from climbing the snow meant we didn’t stick around long. Descending towards the West Ridge was major postholing in the deep snow. We were both leaving bloody prints behind from scraping our shins. The W Ridge itself was snow free and a long long talus descent with much loose scree. I was mostly nervous about dislodging a rock and having it crush my ankle. 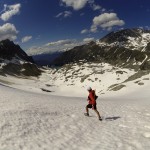 Giving it down the Wedge Glacier. The snow here was much more firm so it was easy to run.

We traversed around under the Wedge Couloir to the Wedge-Parkhurst Col and had a quick discussion about continuing. My feet were not doing so great and Nick was not too concerned about continuing anyway. We opted to call it a day. We headed straight down the Wedge Glacier, sticking skiers left and going around the South side of Wedgemount Lake, under Parkhurst and Rethel by crossing a semifrozen glacial tarn. We had to wade through the creek at the outflow of the lake and then descended back to the creek where we drank some water and picked up our stashed poles. From there, it was a bombing descent to the car and straight to McDonalds for a recovery meal!

This was definitely a long day. We were both pretty worked by the end. Fuelling is definitely a major factor. Also the sun took a lot out of us. Finally, the postholing in snow and endless talus took their toll on us. The intense scrambling on Weart definitely was an added stress for me. Overall though, it was awesome to cover so much alpine terrain so quickly – this is definitely a good example of what I like to do in the mountains.

I don’t believe the three peaks have been enchained before and I am almost certain that all five still have not been done, this is a traverse that is ripe for a strong scrambler/runner to pick. I would not call it low-hanging fruit though, that is for sure. I’d like to go back and tick off all five, especially with the mental reassurance that I have been successful on the NW Ridge of Weart but it will be a while before I am ready for that much talus punishment again. It is also a bit of a hassle to carry the crampons and axe for the whole trip. 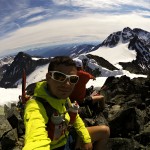 Nick doesn’t always pose for summit photos. At the top of Mt. Cook. 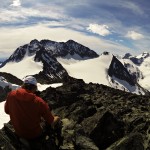 Looking toward Weart and Wedge. 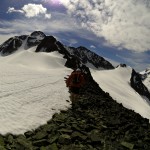 Cook-Weart Col. We tried to bypass the first rock section on the snow to the left but had to turn around and go on the rocks. 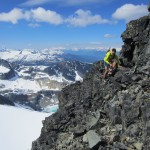 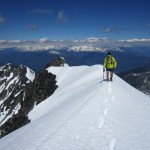 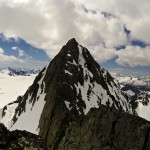 Final summit pyramid of Weart at the crux downclimb through a notch in the NW Ridge. 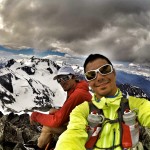 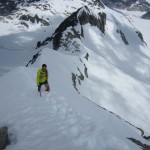 Just before the steeps on the NE Arete of Wedge – Nick E Photo. 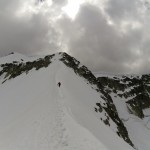 Nick kicking steps up the NE Arete of Wedge. 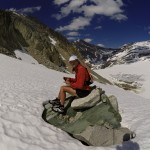 Checking email before heading down the Wedge Glacier. 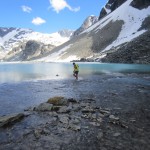 Nick fording the outflow of Wedgemount Lake at the end of the day.